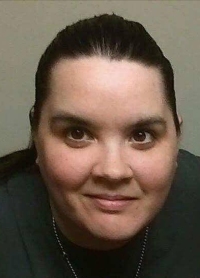 Tangela Moore-Powers graduated with the class of 1999 from Muskegon Heights High School and studied photography at Spring Arbor University.  In the mid-2000s she moved to Mesa, Arizona, where she attended the Arizona School of Massage Therapy and worked as a stocker for Walmart.  She and Sharon Powers met in 2006 and were married in September 2015.

Ryan Pennacchini Hall was born in Midland and grew up in Gladwin.  He graduated from Gladwin High School and attended Eastern Michigan University before moving in 2003 to Tucson, Arizona, where he worked as a manager at Bookmans new and used bookstore.  Pennacchini Hall and his spouse Frederico Hall Pennacchini were married on October 25, 2014.

Flint native Deuntia “Deon” Jackson earned his mortuary science degree from Gupton Jones College in Atlanta and worked as a mortician in Michigan and several other states.  He performed as DJ Envi, helped establish the Safe Space drop-in center for LGBTQ youth at Wellness Services and in 2011 co-founded the Flint Gay Pride celebration.  Jackson was survived by his husband Casio Flood.

Saginaw resident Maria Danielle Bickel was employed by Nexteel automotive and belonged to St. Lorenz Lutheran Church in Frankenmuth.  She was survived by her partner Jillian Peterson.

Farmington resident Robert Edwin Quann Jr. attended Wayne Memorial High School, studied at Miss Katie’s College of Beauty in Canton, and worked as a hairstylist.  In 2012, he became a member of the Metropolitan Community Church of Detroit.