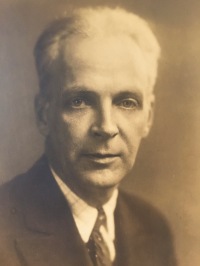 Born in Detroit, Allan Patton Wallace worked as a hardware clerk before moving at age 30 to Manhattan where he performed as a bit actor in five shows on Broadway from the late 1920s through the mid-1930s.  The last decade of his life he resided in Traverse City where he was employed as a desk clerk at the Whiting Hotel.  Wallace left a suicide note and stepped from a ledge at age 64.