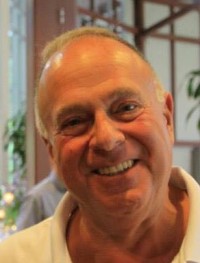 Arts supporter, benefactor, and retired attorney David Lyle Balas was born in Mt. Clemens, graduated from University Liggett High School, and attended universities in Ohio.  He worked with the Michigan Attorney General’s Office and served on the East Lansing City Council as an openly gay member from 1983 to 1995.  Balas and his future husband Jim Sellman moved to Saugatuck in 2003 and wed in 2015.