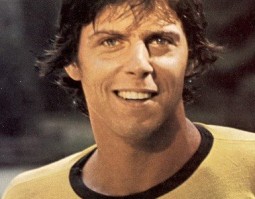 Roger Thomas LeClaire attended Detroit’s De La Salle Collegiate High School, where he lettered in football.  By the 1970s, he had made his way to California and did modeling under the name Geoffrey Kane for Playgirl and International Male.  LeClaire also worked as a photographer and as a bartender in West Hollywood.  He died from AIDS-related complications at age 35.