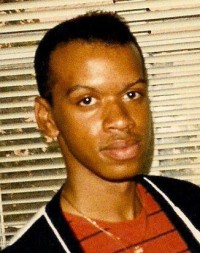 Robert Edward Lee Penick III graduated with the class of 1983 from Cass Tech High School in Detroit.  He came out in the early 1980s on the dance floors of such gay nightclubs as Todd’s, Bookie’s, and the Famous Door.  At age 20, Penick moved to New York City to attend the Fashion Institute of Technology.  He died from AIDS-related complications at age 28.