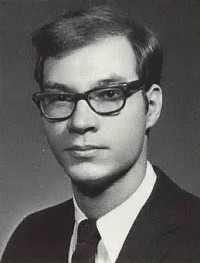 Randall Douglas “Doug” Fox was born in Indiana, earned his Bachelor’s at Earlham College and his Master’s at the University of Michigan.  Following grad school, he moved to Detroit and worked as an assistant manager at Woolworth’s.  Fox’s body was found bludgeoned and shot in the head on the sidewalk in the Virginia Park neighborhood in what friends considered an anti-gay killing.