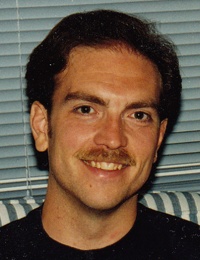 Mount Clemens native Gerald Mark “Gerry” Crane graduated from Mount Clemens High School and attended Grand Rapids Baptist College and Calvin College.  He taught high school music in Byron Center and was loved by his students, but officials hounded him from his job in 1996 when parents learned that he and his partner Randy Block held a commitment ceremony.  Crane died from a heart attack at age 32.

Between The Lines, February 1997