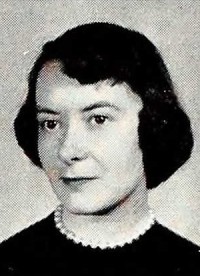 A native of Moline, Illinois, Cynthia Ainsworth earned her B.A. in economics in 1958 from Michigan State University.  A year after graduating, she moved to San Francisco, where she worked as in investments.  She later became a hospital administrator, retiring in 1984.  Ainsworth was survived by her longtime partner Carolee Houser.