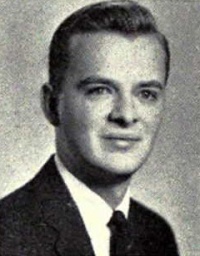 Thomas Weier was 20 at the time of his arrest on felony charges in January 1960 in a crackdown on homosexual activity on campus at the University of Michigan.  Later a noted psychiatrist, he was employed at the Mayo clinic for thirty years, and then served as medical director for the Pride Institute.  Weier was survived by a daughter and son, an ex-wife, and his partner Kee Paisansinsup.