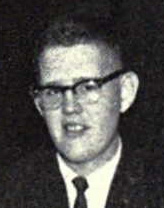 Bryant Fillion was a 21-year-old undergrad when he was arrested in January 1960 in a crackdown on homosexual activity at the University of Michigan.  He was allowed to complete his B.A. at UM and later earned degrees from Long Island University and Florida State.  became a professor of education at Wichita State University.  Fillion was survived by his daughters and former wife.