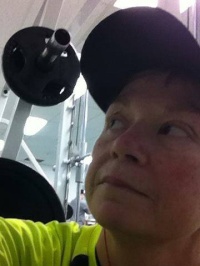 Vicki Arcaro grew up in Jackson and graduated from Jackson High School.  She earned her Bachelor’s from Michigan State University and was employed as an imaging technician for Allegiance Health for 21 years.  She died at age 47 after a three-year battle with cancer.  Arcaro was survived by her wife Jaime Sabin and daughter Gabby.