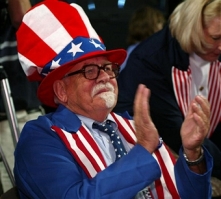 Outspoken Detroit attorney George Maurer served active duty in the U.S. Army from 1949 to 1955 and another 27 years in the Army Reserves.  A co-founder of Wellness House, he earned his B.A. and J.D. from Wayne State University and was also a longtime co-owner of Gigi’s nightclub.